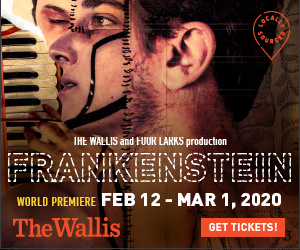 The Wallis and L.A.-based Four Larks’ World Premiere production of Frankenstein is an exuberant amalgamation of dynamic physical theatre, live music and experiential design bringing Mary Shelley's tale to life in a modern take that spotlights the dangers of unregulated technology.

Sourced predominantly after Shelley's novel in conjunction with its 200th anniversary, the production awakens new questions about moral responsibility for each generation.

About the sponsor:
Located in the heart of Beverly Hills, California, the Wallis Annenberg Center for the Performing Arts (aka “The Wallis”) brings audiences world-class theater, dance and music, performed by many of the world’s most talented and sought-after artists.

With eclectic programming that mirrors the diverse landscape of Los Angeles, and its notability as the entertainment capital of the world, The Wallis offers original and revered works from across the US and around the globe.

The Wallis' second season includes its prestigious "Arts & Ideas" series, conversations with guests from the realms of culture, literature and politics. Housed in a breathtaking 70,000-square-foot venue designed by Zoltan E. Pali, FAIA of Studio Pali Fekete architects, The Wallis celebrates the classic and the modern.